When you'd like your dog to be a pit bull 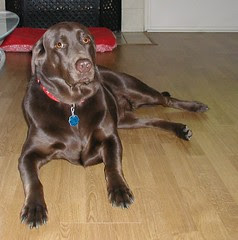 I don't scare easily, and I'm not afraid of being mugged. Tonight, however, while walking with Millie, I went up to the local elementary school. There was a kid in his late teens hanging around on his bike. Since this isn't much of a story, let's spice it up a bit and refer to this person as a ruffian. I was letting Millie sniff around to process various scents, and the ruffian was riding around the parking lot on his bike. He stopped at one point and remained silent. At that point, I began to think the behavior was odd, but didn't worry. Eventually, he rode off and I made my way home for some delicious frozen egg rolls.

Our young tough wasn't gone, though. As I crossed one of the entrances to the school, there he was, sitting on his bike and scoping out the situation. I kept walking, but shot him a look as if to say "What the hell is wrong with you, dude?" For the remainder of the walk, I wondered how handy Millie would be if our ruffian friend had been more menacing and actually had malicious intentions. Millie's great, but she's a Labrador Retriever, so I'm not sure she'd be able to help me out of a threatening situation. I'd have better luck with the Tae Kwon Do that I haven't practiced in about fifteen years. Kiai!!!

Popular posts from this blog

By The Ordinary American April 11, 2021
I like to think of myself as a caring person, and attempt to behave compassionately towards others. Sometimes I fall short in that effort, but failing is what humans do, and successful humans learn from failure. I'd like to discuss what I believe is one of my more recent failures, and what I've come to learn about what's behind it. When the masking guidance and mandates first dropped, it short-circuited me. I reacted in disbelief, anger, and refusal to enter places that required masks. Masking was a simple act that was both scientifically and morally justified. I wondered if I really was a decent person, or if this reflexive pushback was just uncovering undiagnosed sociopathic tendencies. I started to wonder if my outward behaviors of positivity and kindness were just facades that I'd constructed around a dark psyche. Given the rhetoric surrounding mask-wearing, which can — as far as I understand — be reduced to “you're a monster if you don't do this,” it was ha
Post a Comment
More.. »

By The Ordinary American February 04, 2021
At the end of 2019, I began casually practicing mindfulness meditation. Just over a year later, it's become a nearly essential part of my routine; it provides me an off-ramp to ease back into my personal life after an eight-hour (often longer) workday. Some folks have expressed interest in hearing more about this routine, so I thought it would be helpful to chronicle my experiences: the good, the bad, and the frustrating. Buddhism has been an interest of mine for several years now, and I have a particular affinity for the simplicity of Zen Buddhism. It strips away a lot of the religious/spiritual elements more common in forms of Buddhism found in Tibet, for example. I sometimes use the term Zen meditation , when it is probably more accurate to refer to it as mindfulness meditation. This type of meditation focuses on being aware and present for each passing moment. Contrary to popular belief, it's not about emptying the mind or teleporting to some sort of astral plane. It's
Post a Comment
More.. »

By The Ordinary American January 07, 2021
The criminals who invaded the capital on January 6th, 2021 are not patriots. There is nothing noble or heroic about violently storming the capitol building and disrupting a legal proceeding that is outlined in the constitution of the United States . Those who took part in — or even endorsed — such actions are seditious goons with an axe to grind because the election results didn't favor them. The events yesterday were a culmination of unhinged ramblings and lies from the occupant of the White House, and years of disinformation emanating from the dark recesses of the web. Finally, there is simply no room for whataboutism here. The events of the summer do not hold a candle to the actual sedition that we witnessed yesterday. The demonstrations — and yes, violence — from this summer were to protest hundreds of years of oppression and marginalization of Black people. To equate those protests to yesterday's domestic terrorism is fallacious and ignorant.
Post a Comment
More.. »

Meditation: The Journey Beyond the Mind
by Tai Morello